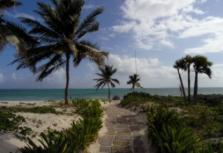 It is a modern resort ashore the Atlantic Ocean, close by the village Neuvitas. There used to be one of the eldest cities in Cuba called Santa Maria de Puerto Principe, lately renamed to Camaguey. But this rich city became a target of the Caribbean pirates, and was attacked and desolated. Therefore, in 1528 the Spanish guvernor decided to move it to the centre of the island, which is its current location. Despite this, pirates found it again, and in 1668 it was attacked by the "most famous" Caribbean corsair Sir Henry Morgan (1635-1688). Today is Santa Lucia a modern recreation centre, with the neverending sundy beaches and many hotel resorts. 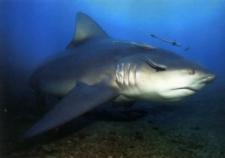 In a diving point of view is Santa Lucia, thanks to a guaranteed appearance of the billsharks, one of the most interesting diving site. This remarkalbe species is said to be an human´s attacker. It can swim many kilometres against the stream and is able to attack aground (the most of its victims are swimmers and people on the beaches), while divers are out of harm´s way. The local diving outpost is called The Shark´s Friends.

Santa Lucia belongs to the favourite areas of the bullshark´s lovers,"advanced Cuban veterans", who got to know the basic Cuban jewels Kuby (Havana, Trinidad) and would like to flavour their adventures by some special delicacy..