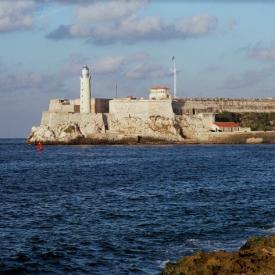 When Diego Velasques founded the settlement of San Cristobal de la Havana in November 1519, he certainly had no idea that a few decades later, this city will become the most important city for both America continents. Convenient location close to a deep and narrow bay (future Havana harbor) and favorable ocean currents were decisive circumstances that in 1553 Havana became the capital not only for Cuba, but for the entire New World. It became the seat of the governor and the marshalling of ships (the main port - Puerto Principal) sailing with an armed escort with a cargo of gold and silver from the Spanish colonies in America to Spain. In the following centuries, when Cuba was the world's largest supplier of sugar the city grew rich, especially due to the trade of this commodity. In Old Havana, which offers innumerable cultural and historical monuments, visitors can admire the splendid square surrounded by castles, palaces and mansions which now serve primarily as a hotels and variety of galleries and museums. After a walk through the Old Havana, you may soon discover that not only this square, but the entire city looks like huge open-air museum where you can breathe the atmosphere of a distant past.